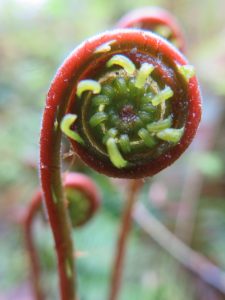 The Daoist teaching of “wu wei” is extremely helpful for relaxing into the flow—of your energy and your life. In class, I usually define “wu wei” as “effortless effort.” This doesn’t mean doing nothing or being limp or lazy. In fact, in the Daoist teachings, wu wei is also described as the act of “effortless action.” It’s acting, but in a way that goes with the flow of nature, including our own nature, which is energy. Wu wei is getting out of our own way so energy and life can flow. It is being aligned with ourselves, instead of resisting what is flowing through our body and our life.

For example, perhaps instead of putting so much effort into a project or relationship or routine that drains your energy, you might instead do less, or follow through on a feeling or inspiration you normally wouldn’t. A different outcome is guaranteed and you may be surprised at the unfolding of the experience.

Maybe instead of trying everything possible to heal an injury or ailment or disease you will, just for something different, do one thing that feels exactly right—something nourishing, timely, loving, simple, easy.

Instead of working too much, maybe you’ll work less, but dive in deeper and find that your work and your life change.

Maybe, instead of wishing for the end of a yoga posture, you will not judge the experience as good or bad, or comfortable or uncomfortable, but will instead soften, don’t try so hard, and simply experience it in that way.

These are a lot of words to describe something so simple and logical. Simple, however, isn’t always easy when we’ve built actions and patterns and behaviours on the idea of “no pain, no gain,” and “hold on tight.” I am challenged not just every day, but often every hour and sometimes minute to minute to let go of the idea and habit that more effort and harder effort is the way to create my best life. This goes against nature, which goes against myself.

Lao Tzu said, “Life is a series of natural and spontaneous changes. Don’t resist them—that only creates sorrow. Let reality be reality. Let things flow naturally forward in whatever way they like.”

I invite you to join me in opening to the idea and shifting to the reality of wu wei—effortless effort. To float and swim and ride with the river instead of pushing upstream. This takes exploration, awareness, acceptance, courage, kindness to self, breath, posture, and flow. For me, it takes qigong.

Join me for World Qigong Day QIGONG for WOMEN workshop (Saturday, May 19, 2018)